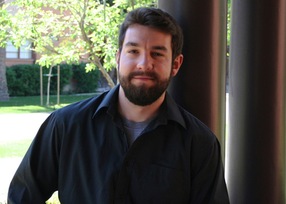 PBS Newshour ran a feature of BOA poet Hugh Martin this week, for his recent win of The Iowa Review's first-ever Jeff Sharlet Memorial Award. Already making big waves in the literary world since winning the 11th Annual A. Poulin, Jr. Poetry Prize, Martin won the inaugural award out of an entry pool of 265. The prize is only open to active duty military personnel and veterans and was judged this year by Pulitzer Prize-winner Robert Olen Butler; the prize includes a $1,000 award and publication in the journal. Having spent 11 months in Iraq, Martin's poems capture "his war experience and his return to civilian life." The poet kept a journal about his experiences while overseas; it helped generate the poetry which won him the Jeff Sharlet Memorial Award and his first book The Stick Soldiers, to be published by BOA next spring, but he never actually wrote poems while in Iraq. "It's very strange and you don't really know how to talk about it and it's hard to find people to discuss the experience with," Martin said. "So you can write about your experiences and get it off your chest that way... All I can really do is write about it, because I want to and because I want to show people who weren't there what it really was like." Russell Valentino, editor-in-chief of The Iowa Review, reported that many of the entries had similar "somber and profound" themes. "Some of the stories were...very raw," Valentino said. "You could really tell [a] person was writing from a first-person perspective... The quality was very high because of that sort of authentic voice, yet writing about war represented only a portion of the topics covered by entrants. It's not for writing about war. It's for writing by veterans." The Jeff Sharlet Memorial Award is named after the Vietnam veteran and antiwar writer and activist who passed away in 1969. His family, who provides funding for the award, believes that it might change "knee jerk assumptions about what veterans believe or don't believe, write about or don't write about." Read the PBS article here.
Tweet